The American patriot Thomas Paine, author of Common Sense, wrote also about the Freemasons, though less famously.  Freemasonry, he stated, “is derived and is the remains of the religion of the ancient Druids, who, like the magi of and the priests of in , were priests of the sun.”  I had never before associated Masonry with the Druids, but the idea of the Masons, Druids and Egyptian priests being connected through sun worship makes sense to anyone who has toured the Masonic House of the Temple in Washington, D.C.—the building is full of Egyptian iconography and symbolism, highlighted by the pair of giant marble sphinxes flanking the structure’s entryway.

If the Freemasons truly did derive from the Druids as Paine argued, and if the Masons truly did design Washington, D.C. in such a way as to imbed their secrets within that design as so many modern observers have suggested, then shouldn’t there be evidence of Druidic influence in the city’s layout?  It turns out there is, in a stunningly obvious way.


and radiate out from the Capital building in a northwesterly () and southwesterly () direction.  The angle in which they do is approximately 20.5 degrees off of due west, a seemingly random angle.  Or perhaps not.  Importantly, each avenue connects the Capital building with a crucial D.C. landmark— leads to the White House, and to the Jefferson Memorial.  So, again, is there anything significant about the placement of these roads/structures?  (Obviously there is, else I would not have bothered with this blog post.)


As readers may know, the sun-worshipping Druids marked and observed not only the equinoxes and solstices, but the cross-quarter days as well.  These cross-quarter days fall between an equinox and solstice, and occur in early February, May, August and November.  In many ways they are the most accurate way to mark the seasons—the height of summer occurs in early August and the height of winter in early February.  For the pastoral communities of the that were home to the Druids, these days also mark important events in the calendar.  For example, Samhain in early November was the traditional time to slaughter livestock for consumption during the winter months, while Beltane in early May was the time to drive cattle to their summer grazing lands.


So do the Freemasons observe these cross-quarter days?  If Thomas Paine is correct, logic would argue that modern Masons should follow the practices of their Druidic antecedents.  As with many things with the Masons, the answer to this inquiry is hidden in plain sight. Pictured below is a Masonic Royal Arch banner, commemorating the Royal Arch degree—I will not get into this too deep other than to say the Royal Arch degree’s importance is reflected in the fact that it is the only degree in Freemasonry which is a prerequisite to becoming a Master Mason. 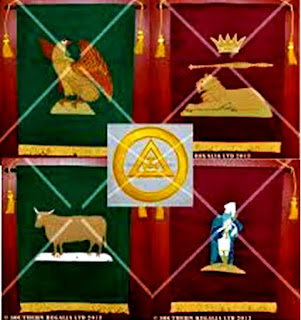 Note the four symbols portrayed on the four crests that surround the central Royal Arch degree insignia:  Clockwise from upper left we have an eagle, a lion, a man and a bull.  Those familiar with astrology will recognize the signs of Scorpio (the eagle being a symbol, along with the scorpion, of Scorpio), Leo, Aquarius (man being the water carrier) and Taurus.  These signs, in turn, directly correlate to the four cross-quarter days:  Imbolc occurs at the height of Aquarius (that is, at the precise midpoint of Aquarius’ Zodiacal cycle), Beltane at the height of Taurus, Lunasa at the pinnacle of Leo, and Samhain at the apex of Scorpio.  So it appears Paine was correct in his assertion.  Masonic ritual marks and celebrates the cross-quarter days just as the Druids did before them.

So, back to and our seemingly-random layout of the White House and Jefferson Memorial vis-à-vis the Capital building.  Savvy readers will not be surprised to learn that on Beltane the sun sets on the horizon directly above the White House along (White House pasted into image):

Similarly, on Imbolc the sun sets down atop the Jefferson Memorial (also pasted into image): 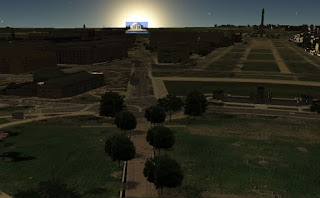 In conclusion, it seems that Paine was correct in his assessment that Freemasonry derived from the religion of the ancient Druids, as evidenced by the Masonic-inspired Druidic solar alignments prevalent in the layout of
Posted by David Brody at 4:45 PM 3 comments:

In anticipation of next Saturday's season finale of H2's "America Unearthed" series, starring forensic geologist Scott Wolter, I wanted to post some images of and information regarding the so-called Hooked X (or Forked X) mark found this past summer on the Westford Knight carving. This Hooked X mark will be prominently featured in the finale.

Here are some images: 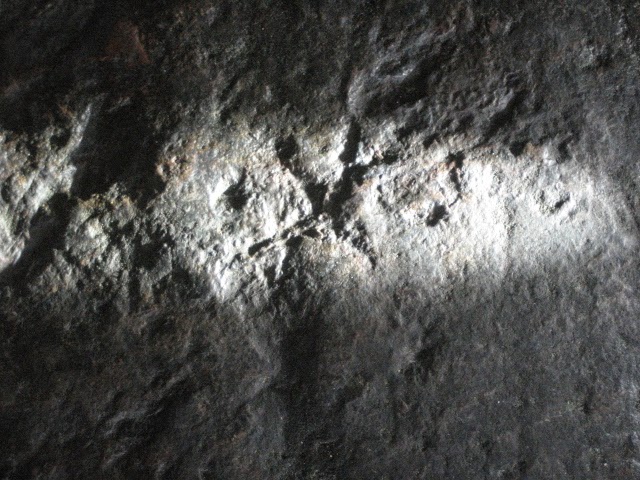 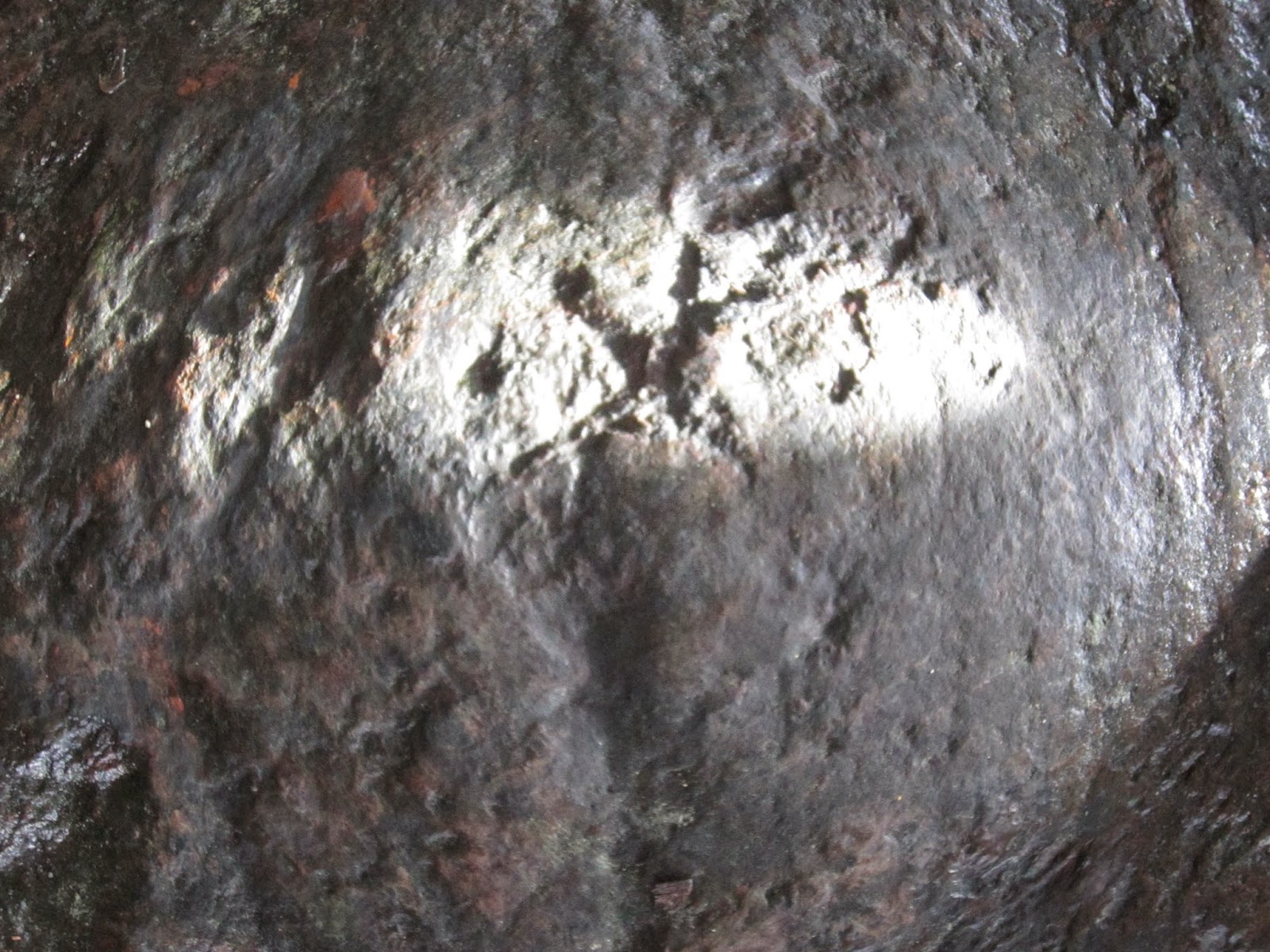 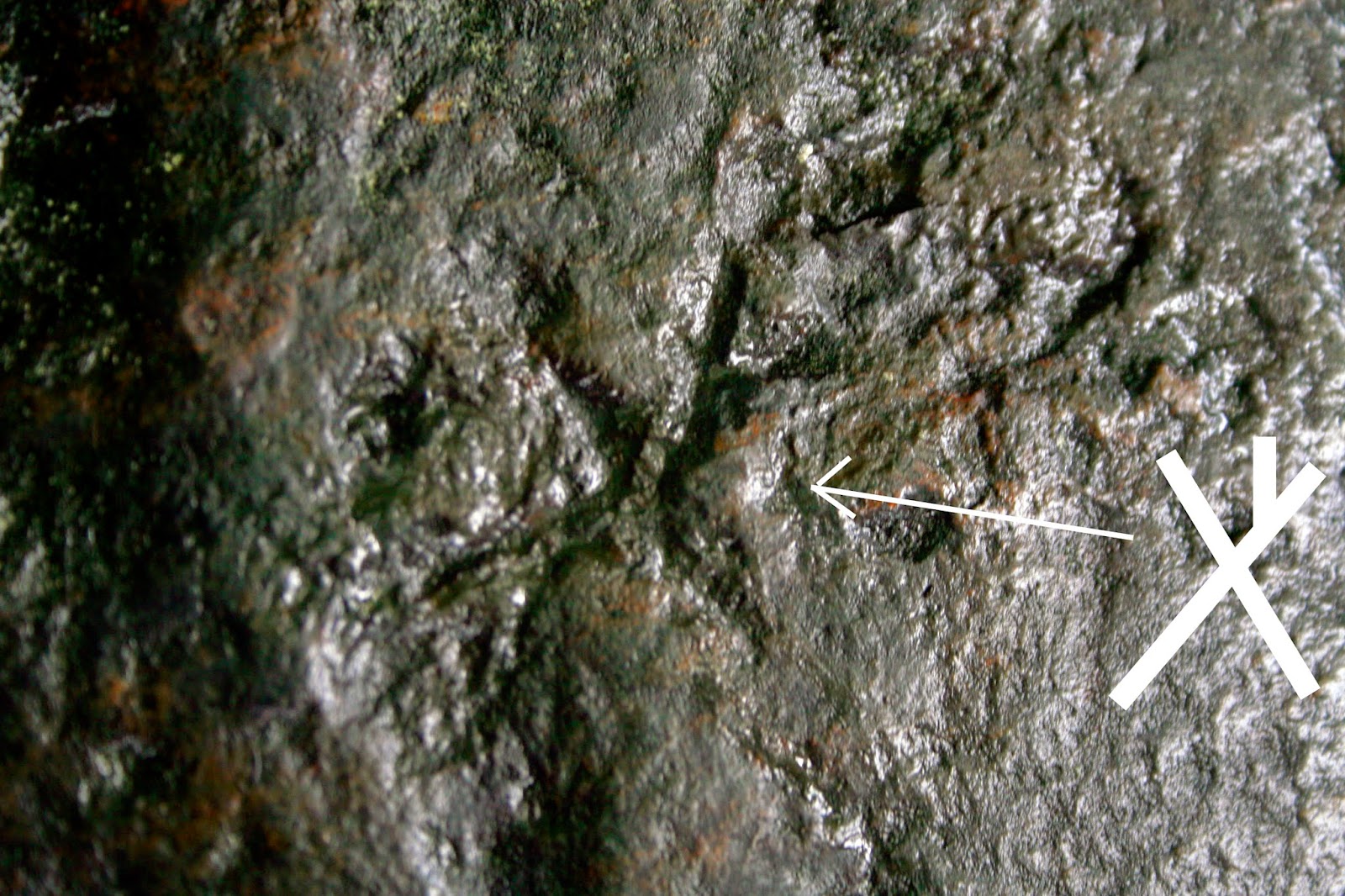 Most readers, I think, will be able to make out the Hooked X mark as well as round dots marks equally spaced both to the left and to the right of the mark These dots may serve as word separators. The location of the mark is consistent with a "signature" of the carver, located near the bottom corner of the carving.

No doubt that critics will attempt to downplay the significance of this mark and/or argue it is a hoax of some kind. Regarding the possibility of hoax, I will note that the likelihood is negligible for two reasons:

1.  The weathering of the Hooked X mark (see below).

2.  The fact that the mark appears on a plaster cast made of the Knight many years before Scott Wolter began his research on the Kensington Rune Stone and first identified (and popularized) the Hooked X rune as an important clue to the Rune Stone's origin.

I also want to observe that, in reading some of the reviews of "America Unearthed," some skeptics seem unwilling to concede that even a single artifact analyzed on the show evidences even the possibility of pre-Columbian exploration of America. Let me state that another way: In these critics' minds, there is a 100% chance that 100% of the artifacts are fakes/hoaxes. I'm sorry, but that is not the world I live in. The world I live in is gray, where parts of history are unknown. This is not to say that every AU episode makes a compelling case, but the idea that every episode and every artifact is 100% flawed is untenable to me and, quite frankly, makes the critics look close-minded and agenda-driven.


I am happy to answer any questions, but I will not allow posts that are in my judgment uncivil.

Finally, here is an earlier post from 10/7/14 that I have copied and pasted in this post for easy reference: 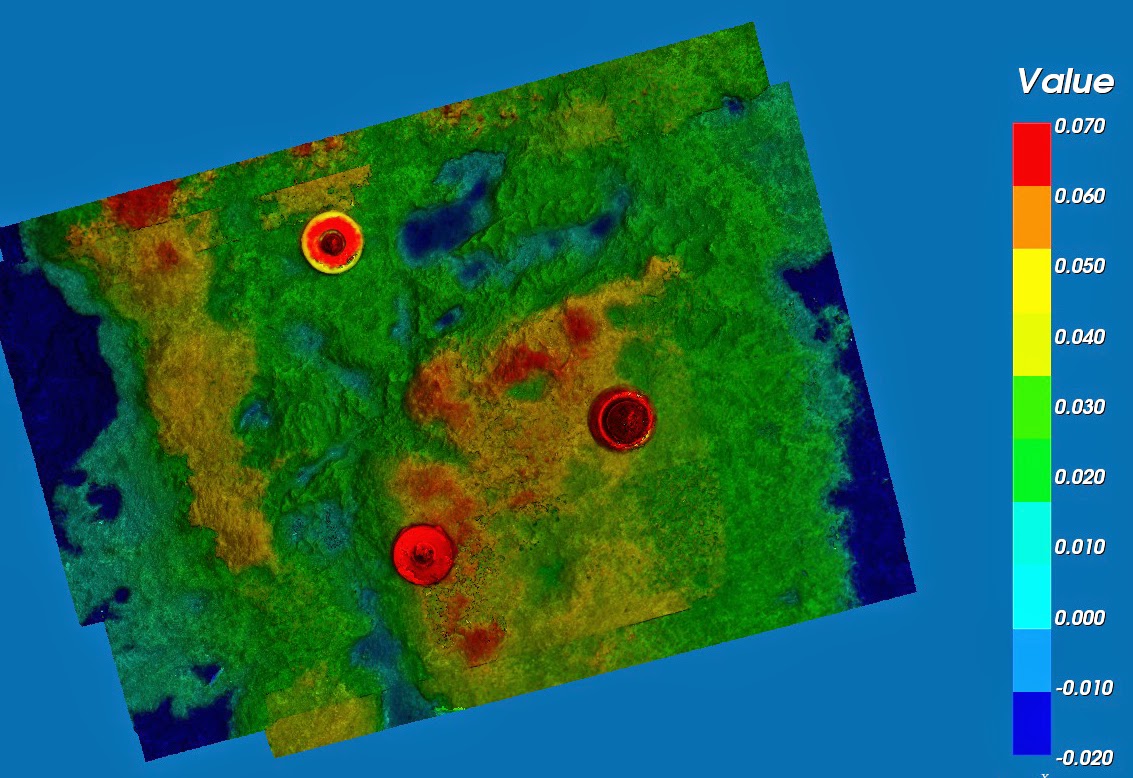 Looking at the color chart on the right of the image, we see that all the carved lines/dots in question are approximately one to one-and-a-half color gradations in depth--in other words, carved or punched at a relatively similar depth.  Again, this points to a man-made origin. 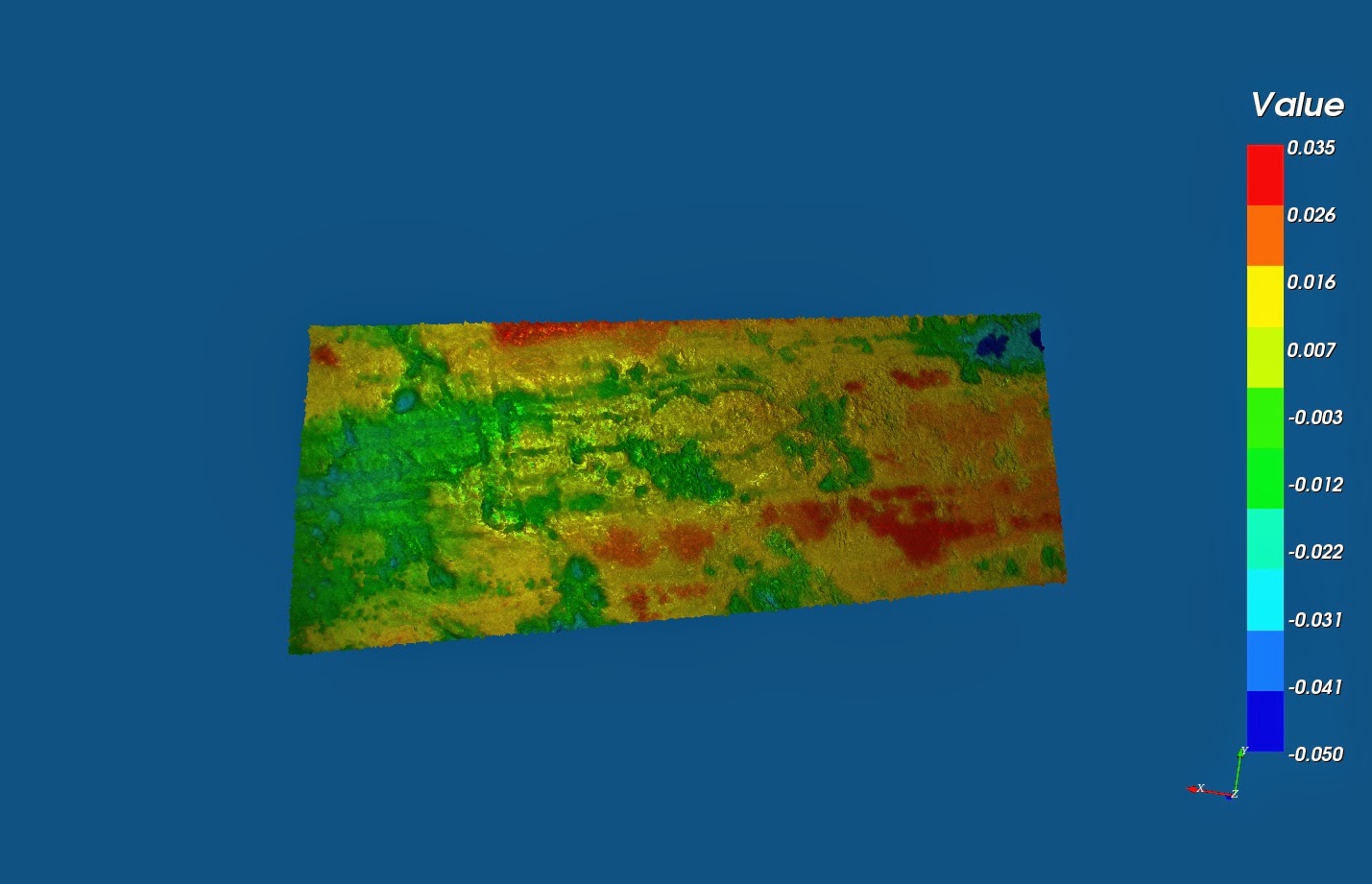 Scott Wolter has not reviewed all the data yet, but he and I had a long telephone conversation on September 26 and his preliminary conclusion is that it is 85-90% likely that the mark is indeed a man-made Hooked X carved at a time contemporaneous to the sword carving. As I understand it (and Scott has not reviewed this post), this conclusion is based on the following factors:

When I asked Scott why this only added up to 85-90% certainty, he laughed and said that his only hesitation was that finding a Hooked X on the Westford Knight carving was simply "too good to be true."
Posted by David Brody at 7:24 PM 7 comments: