I'll be doing a talk followed by a booksigning for "Cabal of the Westford Knight" at the Barnes & Noble in Nashua this Saturday, April 18, 1:00-2:30. As always, it's nice to see familiar faces.
Posted by David Brody at 1:11 PM No comments:

Templars and Shroud of Turin

Interesting story yesterday that the Vatican has confirmed the Knights Templar brought the Shroud of Turin out of the Middle East during medieval times and kept custody of it for over a century in France. This is consitent with what many believe: that the Templars took many religious artifacts from Jerusalem during the Crusades and brought them back to Europe for "safe keeping." Here's a link to the story:
http://www.timesonline.co.uk/tol/comment/faith/article6040521.ece
Posted by David Brody at 4:50 PM 3 comments: 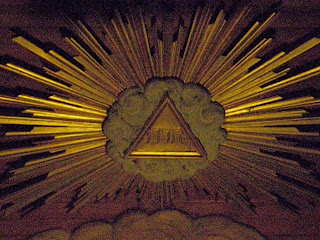 For those who have read "Cabal of the Westford Knight," much is made at the end of the book of the possibility that the Tetragrammatron (the 4-letter Hebrew name of God which most know as Yahweh) may be a feminine word. This dovetails with the theory that the Knights Templar may have run afoul of the Church during medieval times because they believed in and worshiped the "feminine" aspect of the Godhead and rejected the strict patriarchal Church teachings. See the attached image, taken at Notre Dame Basilica in Montreal by Tim Suess, showing what appears to be the Tetragrammatron inside a triangle, framed by rays of light commonly denoting divinity. This image is directly overhead in the pulpit in the middle of the nave. Upon closer inspection, the Tetragrammatron is actually a Trimgrammatron, with the first letter ("Yud" in Hebrew) omitted. Without the "Yud," the word reads "Chava"--or "Eve" in English. Importantly, this Basilica is believed to have been built by Colonial-era followers of the Templar traditions. Could it be that the Basilica's Templar builders purposely portrayed the divine in a feminine form?
Posted by David Brody at 2:58 PM No comments: