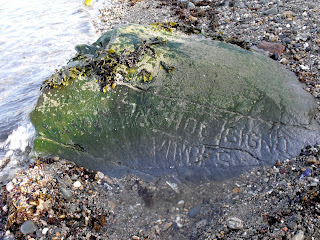 This inscription was found at low tide after a major storm in April, 2010, along the beach in Newport, RI not far from the Newport Tower, by Rhode Island resident Irene Daponte. The inscription reads, "IN HOC SIGNO VINCES," which is a Latin phrase translating to, "With this as your standard you shall have victory." The slogan has been used by various military and religious groups over the centuries, including the Knights Templar. On the back side of the stone there are other markings which we have not yet identified, but one marking appears to be a Templar cross. The stone has since been reburied in the sand by the surf, but we have marked its location and will return to study it further when weather and tidal conditions allow.
Posted by David Brody at 4:07 PM 16 comments: