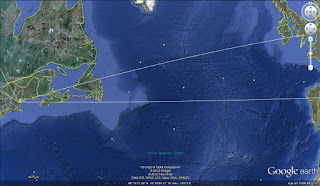 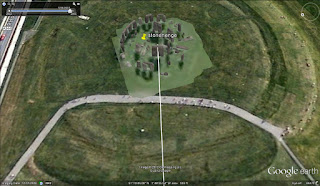 Happy to see H2's "America Unearthed" show did such a good job with the America's Stonehenge episode that aired this weekend (and will re-air over the coming weeks). Some of the episodes have been disappointing, but this one did a good job summarizing the evidence and describing why many people feel the ancient Phoenicians build the New Hampshire site, perhaps 3500 years ago. The son of the owners of the site, Kelsey Stone, has done some fascinating work showing how the summer solstice sunrise illumination links the site to Stonehenge in England and also to the Phoenician homeland of what is modern Lebanon. Standing at the center of the NH site, and looking directly into the summer solstice sunrise, one's line of sight would pass directly through one of the arches at Stonehenge, England. Attached are images showing this phenomenom, courtesy of Kelsey Stone (on the top image, the bottom line is simply the east-west line; the upper line is the summer solstice sunrise line). The line of sight, extended, eventually would also pass through Lebanon, presumably where some ancient Phoenician temple or monument would have been erected.
Posted by David Brody at 2:00 PM

This episode was awesome, and I was very excited about the ley line connecting the site to Stonehenge and then to Beirut, Lebanon! I read about this site about thirty years ago, and have been fascinated by it ever since.

I am curious what would be in the line if you continue it West across America, etc.

Richard: We have looked for significant correlations moving westward but have not found anything yet. Please let me know of you come up with anything!

I was not aware of this alignment. Is it exact?

Does the line(s) go past, or lay on any archelogical digs? It would be interesting to see if there is a way to correlate such sites, or even, find new ones not yet discovered...perhaps by a mathematical equation (in relation to the stones - ie: diameter; and then lay that diameter out in a straight line to find the next one, etc...) Just a thought...I am no scientist or mathematician, but I do try to imagine (somewhat logically) possibilities...

I too thought the episode was very cool, my Dad and I loved it... what is the name of the program you used to get the lay lines? Somehow, I don't think Street Google would do this... :D

Jennifer, we have been looking for other sites/ruins along the alignment line. I'm guessing there are (or were) some--the question is have they survived and if so can we find them?

We went to Stonehenge in February of 2013 and were amazed that our tour guide brought up the lines and connections to this site. I had heard of the connection but was amazed that the guide there would mention it. Very interesting!

Hi Elizabeth. Are you saying that the tour guide at Stonehenge England brought up the connections to America's Stonehenge? If so, that truly is amazing. I was not aware the information regarding these alignments had been given legitimacy across the Atlantic...

There is more to this connection that my son and I have been investigating. The recently exposed Israeli Stonehenge, British Stonehenge, the American Stonehenge and the Sun Pyramid at Teotehuacan near Mexico City form a perfect straight line. There is more. But that is about as much as I would want to divulge at this time. This correlation and other details very well may turn world history upside down.

Very interesting, Roger. My research shows the line from American Stonehenge to British Stonehenge extending into southern Lebanon. But that would only be incrementally off from continuing down in a southwesterly direction very close to the Golan Heights. I have not looked at the line extending toward Mexico but will do so. Back to Lebanon: Assuming there were Phoenician sailors in America (who build Am-Stone), it makes sense to me that the line would extend back to some temple/site in the Phoenician homeland (now Lebanon). But the Is-Stone site, though now part of Israel, would make sense also as ancient Phoenicia extended almost to the Golan Heights. Would love to hear what else you've learned. Feel free to email me dsbrody@comcast.net

David, without putting my neck out too far here is a theory that I am most interested in about this line. Since we are researching the structures designed with the Solstices and Equinox and other mid solstice projections in mind this line has formed a path of sunlight from an angle the sun would illuminate at a particular day of a particular year, hour, minute and second with the British Stonehenge at high noon. In other words, draw a line from center of the sun to center of earth. Now imagine a projection of light in the form of a disk radiating out from the sun in this line/angle. Slide this disk toward the earth's center and you will have this line. This would be the line formed by the Am Stonehenge, Brit Stonehenge and the Israeli Stonehenge. Further, with a slight deviation of this line, to compensate for continental drift over the last 3500 to 5000 years, this line continues through the Teotihuacan Sun pyramid and continues to the center of Cuicuilco pyramid, said to be the oldest in the world and extends even through center of the volcano, Xitle that destroyed the ancient city of Cuicuilco forcing the Zapoteca people to relocate to Monte Alban where the story continues. One outstanding fact there at Monte Alban is their calendar they designed. This calender when superimposed over the Israeli Stonehenge it has an eerie resemblance conceived nearly 7000 miles away but at the eastern most source of the line. Of course, this line may vary somewhat along this theoretical course, if one would allow for continental drift. After all the axis of the earth shifted 3 degrees following the Chilean equake of 2010. Imagine the possibilities.